Join the investment community and start your week with market insights seen through the lens of alternative web data.
Markets
1.7.19   7:35 PM Markets

Zillow is doubling down on its in-house Zillow Now brokerage. Here's the hiring data.

There's a new breed of real estate brokers looking to do for selling your home what AirBnB ($PRIVATE:AIRBNB) did to simply renting it out. Services like Opendoor give homeowners an offer up front and take them out of the deal, making for a tidy profit (along with some assumed risk, of course). It's a newly common service that's growing and, if the upcoming predicted housing lull does in fact come, will likely become more popular as homeowners look to get out of their homes with ease.

Investors seem to agree, too: Opendoor has already raised $645 million in equity and $1.5 billion in debt.

Not to be left out, real estate listing giant Zillow ($Z) has gotten in on the action with Zillow Offers. And according to hiring data for the service, Zillow has no plans to slow down when it comes to undermining the role that traditional agents play.

Job titles containing "Zillow Offers" have been on the rise since last summer, moving from just 9 positions in July 2018 to 40 in November, settling in at 35 as of this week.

Zillow Offers was first launched in Phoenix, Arizona. A look at hiring data in that locale reveals that Zillow is doubling down on its charter market, which is a sign that expansion is soon to come in other markets.

One of the more common job listings for Zillow in that area is very telling; it's for a "Closer," or someone who handles the hand-over of property, shuffles contracts, and, in short, moves real estate from one owner to the next. 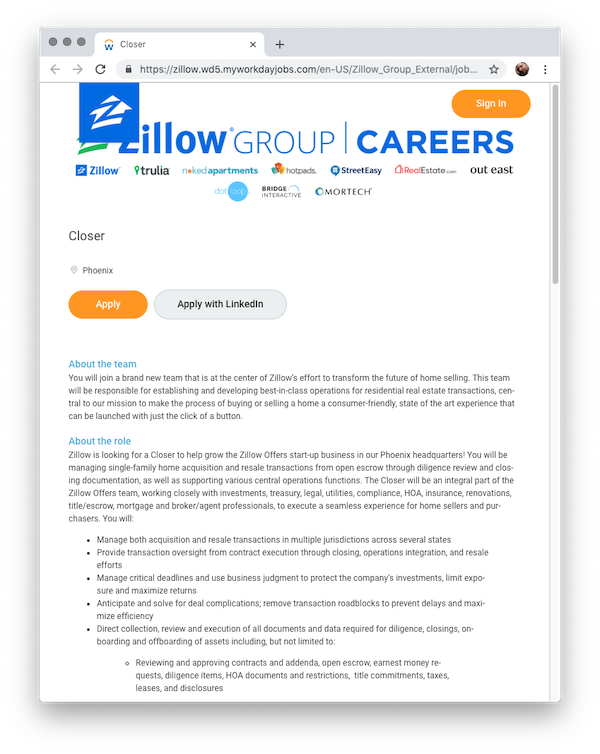 By looking at the openings in Phoenix for Zillow, we get a decent picture of what future Zillow Offers offices will look like. As you can see below, they include everything from the aforementioned Closers to Renovation Project Coordinators (for those quick flips), Acquisitions Managers, and New Markets Coordinators, among others.

But Zillow is a national company with thousands of employees. That means it's a relatively matrixed organization, with operations roles for Zillow Offers scattered throughout the company. As such, by looking at all jobs with the term "Zillow Offers" in them, we see how the company is positioning its homy buying service for scalability and domination of the emerging marketplace.

The table below reveals that, at the end of the day, Zillow Offers is a technology platform. A major hiring effort for Software Development Engineers, Data Scientists, and Applied Scientists reveals that while field offices will be important for the service, Zillow is treating Zillow Offers as a software platform.

This will no-doubt show itself as a major advantage for Zillow as it competes with upstarts like Opendoor, regardless of the investment capital the latter have received.

What about Zillow and independent brokers?

Zillow — that is, vanilla Zillow — has become a permier listings site for buyers, sellers, and especially real estate agents. With Zillow getting into the brokerage game itself via Zillow Offers, it's unclear how agents will react to the in-house competition.

As of now, Zillow doesn't list homes on Zillow when homeowners request offers. However, it likely does list them once they've been bought by Zillow.

Due to key missteps in management as well as heavy losses in the wake of COVID-19, Bridgewater Associates may not bounce back to claim its crown.
Ivan De Luce
9.22.20   6:00 PM
People
View All