Join the investment community and start your week with market insights seen through the lens of alternative web data.
Markets
10.2.18   4:24 PM Markets

With similar products and customer bases, Target and Walmart are daily destinations for thousands of Americans. Here's how they compare when it comes to location data.

As students head back to school, households gear up for Halloween, and cooling weather calls for warmer wear, Americans are heading to big-box stores like Walmart ($NYSE:WMT) and Target ($NYSE:TGT) in droves.

Chances are, there's both of these department store retailers in some iteration near you, whether it be a Walmart Superstore or a more straight-forward classic Target. Here's how the two chains compare when it comes to where they set up shop.

With more than 3,000 locations, the number of Walmart Supercenter hyperstores dwarfs that of both its competitor Target and its sibling Walmart classic. The average size of a Walmart Supercenter is a massive 179,000 square feet and sells everything from fresh produce to toys, electronics, clothes and furniture. This compares to the grocery-only version of Walmart — Neighborhood Market by Walmart — which range from 28,000 to 65,000 square feet. 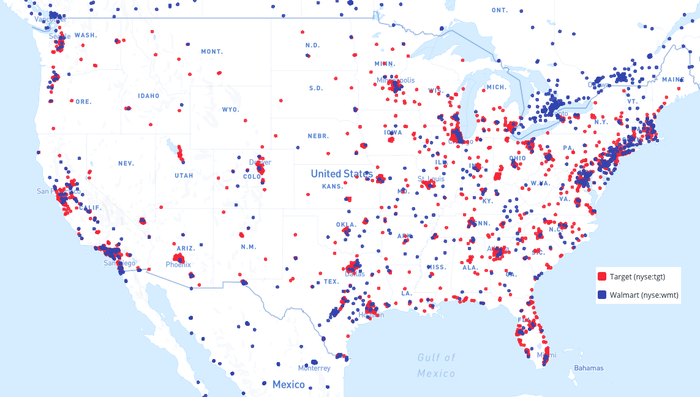 Currently, Target only has around 230 SuperTargets in operations, and its most recent openings have been in a smaller, 50,000 square-foot format. Target hopes the smaller stores, located in college towns, will attract younger buyers. A straight comparison ot Target to Walmart when mapped shows relative parity, as seen above. 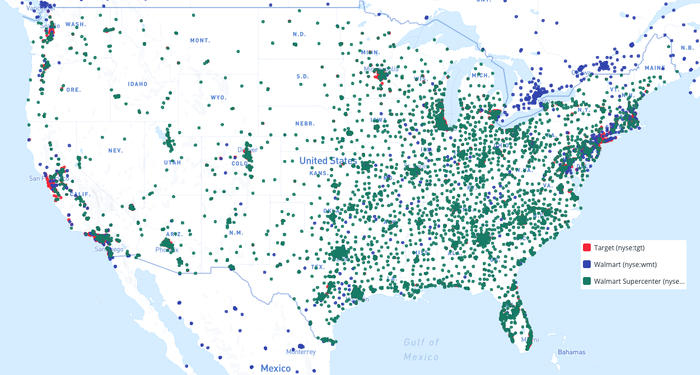 However, when Walmart Supercenter is added to the map, it becomes clear where Walmart's focus is: hypermarkets in American communities that aren't served by major competition. This illustrates an interesting divergence between the brands, with Target going after younger buyers and Walmart going after established American families. 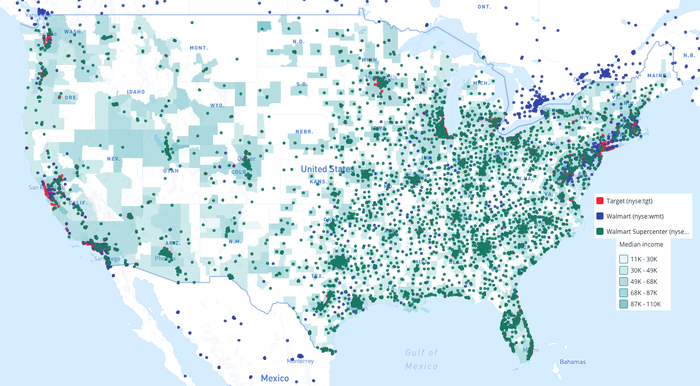 The divergence of brand strategy emerges more clearly — and quantitatively — when store location median income data is compared. While Target and Walmart share a virtually equal median income average of above $60,000 across locations, Walmart Supercenter locations have an average median income of $52,000, or 15% less.