Sure, all used cars lose value. But these 5 makes lost more average value on the used market than any other.

One thing is clear: with extreme exceptions, used cars lose value over time. But for some luxury car brands, the used market has been less kind to some makes more than others.

Of the top-5 most expensive makes sold at Carvana in the past year, Tesla lost the most value on the used market, at least according to Carvana. Land Rover average value dropped the least of the 5 markers, with an average loss of just $2,800 in the past year. 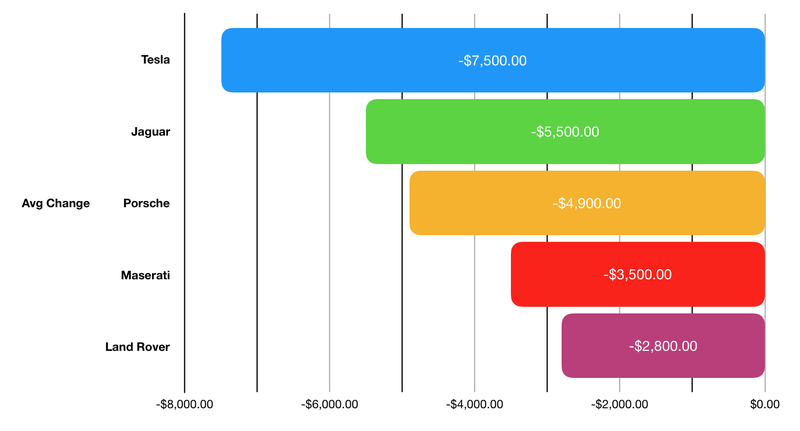 Used Teslas continue to be a bit of an anomaly. The brand is still young, even though used Teslas now date back to 2012. CarMax recently stopped selling used Teslas.

UPDATE: CarMax reached out to us with a statement on availability of Teslas at their dealership: "The mix of our used vehicle inventory by make, model and age will vary from time to time, depending on consumer preferences, seasonality and market availability. CarMax does not have any Teslas available for sale at this time."

This startup is helping small businesses compete with giants like Amazon

The Nickel Queen: How Ashley Zumwalt-Forbes climbed to the top of the electric vehicle battery industry

Ashley Zumwalt-Forbes went from being the first in her family to attend university to making the Forbes 30 under 30 list in just 12 years.
Danny Konstantinovic 7.31.20   6:00 PM
People

Rental or resale? The pandemic might kill Rent the Runway, but Depop will thrive

Can dating apps like Tinder and Bumble survive the pandemic? Here's the data

While social distancing is great for public health, it’s hurting the dating game. Dating apps like Tinder, Hinge, and Bumble have rolled out new features in recent months to entice users and weather the pandemic. But will users keep swiping right?
Andrew Hirschfeld 7.30.20   6:00 PM
Innovation

With the pandemic spreading and college sports on hold, who wants to go to Buffalo Wild Wings?

Nobody has a craving for BWW's hot wings.
Danny Konstantinovic 7.30.20   4:00 PM
Innovation
View All