Join the investment community and start your week with market insights seen through the lens of alternative web data.
Innovation
3.12.19   4:36 PM Innovation

A small team of job listings with "starlink" in their titles have begun appearing on SpaceX's careers site.

Last year, SpaceX launched many satellites, but two were of immense importance when it comes to broadband internet: Tintin A and Tintin B. They are test satellites for the company's upcoming Starlink Constellation, a worldwide data network that would not just blanket the world in WiFi, but also help fund future SpaceX projects.

The Tintin satellites never reached operational orbit. Despite that, Elon Musk has tweeted that TinTin A & B are in the sky and showing latency low enough "to play fast response video games."

So is Starlink really going to happen?

According to hiring data that we track at SpaceX, the answer is a resounding "Yes!" That's because SpaceX has begun hiring a team for Starlink, marking what appears to be the first time it's publicly mentioned Starlink in its job titles.

The job titles — although less than a dozen openings — paint a small but diverse team of network engineers, product designers, electrical engineers, and reliability professionals. They're spread throughout SpaceX's two major development facilities: the Hawthorne headquarters and Redmond technology hub. 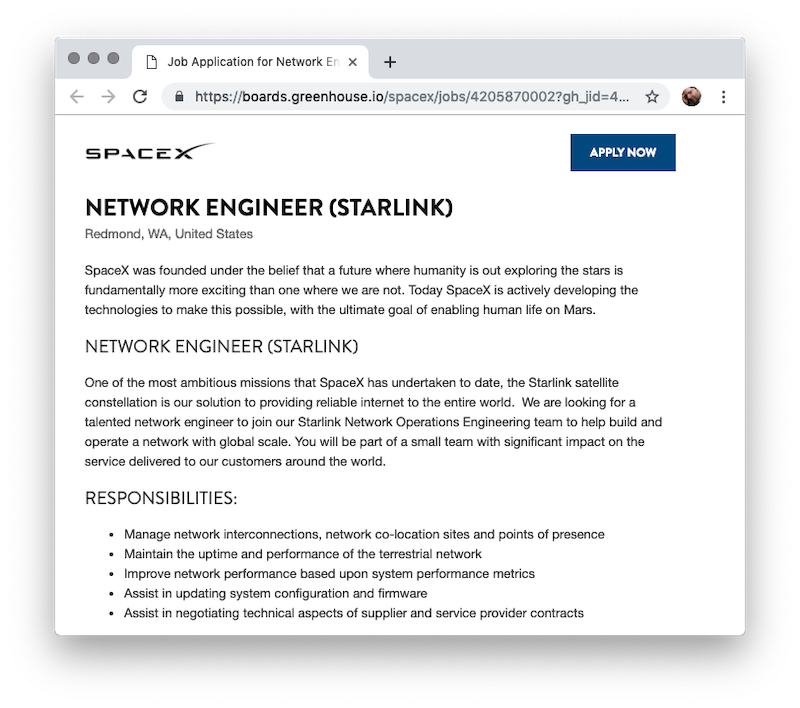 We won't venture to guess what this means in terms of a Starlink launch date, but the newly created jobs bode well for the orbit-based broadband network. We'll keep our eyes on the data.