The ambitious, bold and hungry start their week with The Business of Business!
People
5.7.19   4:58 PM People

Job growth for remote and work-from-home positions is outpacing that of on-location jobs, according to listings data for almost 1,000 companies.

At the end of 2015, remote job listings accounted for roughly 0.02% of all openings. As of May 2019, that percentage has grown to 0.15%. While those percentages may be small, what we're seeing here is a real trend toward major companies opening jobs for remote workers. A trendline analysis (exponential) shows an acceleration. 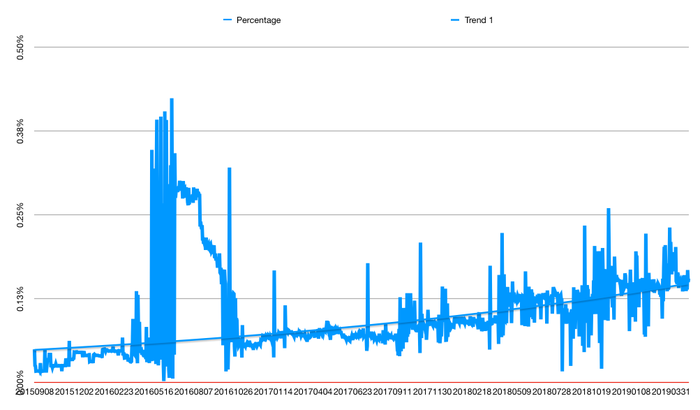 The overall trend also reveals an interesting phase in the summer of 2016 where employers went on a bit of a hiring spree for remote workers. Or, conversely, it was a period when overall job hiring was up. We can tease that out by looking at overall job openings below.

Indeed, at the time in question, overall jobs didn't see a massive spike and subsequent correction, indicating that in 2016, remote workers had a good summer.

The types of companies hiring remote workers tend to be in the technology and health sectors, where working from home — or on the road — is increasingly common. Dell ($DVMT) tops the list followed by Anthem Health ($ANTM) for total number of remote job listings over time.