The ambitious, bold and hungry start their week with The Business of Business!
Markets
1.17.18   12:30 AM Markets

Oscar Wilde once quipped, “The only thing worse than being talked about… is not being talked about.” From a marketing perspective that’s certainly true, but it’s also true that not all talk is created equal. Papa John’s Pizza ($PZZA) has been delivering headlines on and off for the past few years, but not because folks were singing the praises of its pepperoni. The latest firestorm was sparked when Papa John’s founder John Schnatter decided to pull some half-baked opinions on the #TakeTheKnee NFL players protest out of the proverbial oven.

We thought it would be interesting to see how people reacted to all of this from a data-centric standpoint, especially on social and financial terms.

You can see the resulting bump in Papa John’s Facebook mentions… the chatter is quantitative, but as we all saw, the quality of comments were a mix of positive and a whole lot of negative.

The real fun started during a call with investors, trying to explain away the fact that sales were only up 1% when they’d been projected 3 or 4 times that, and Schnatter blamed the NFL.

“The NFL has hurt us by not resolving the current debacle to the players’ and owners’ satisfaction,” he reportedly said. “NFL leadership has hurt Papa John’s shareholders.”

Then he said he was cutting Papa John’s NFL-associated ads to “avoid being associated with the league”. (A company spokesman told the Washington Post that they weren’t actually cutting ads, just removing NFL logos from their own ads – in fact, they had already dropped the NFL logo from their website sometime in September). 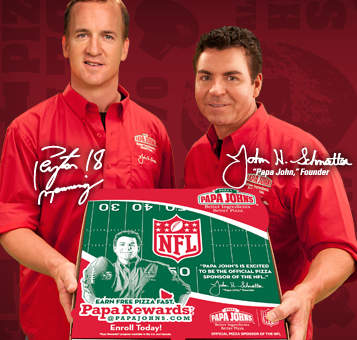 But is there any correlation between protests and profits? Fortune doesn’t see one. “It’s worth noting, though, that NFL ratings have been declining for some time. Overall NFL ratings were down 9% in the 2016 regular season and fell 6% during the playoffs, according to analyst Michael Nathanson… During the 2016 season, Papa John’s reported system-wide North American sales increases of 3.5% for the year.”

Maybe Schnatter was just freaking out over the 11% drop in share price that had been precipitated by the earnings report, and went fishing around for a scapegoat (or scape-pigskin?). Forbes reported he’d personally lost over $70 million, just that day. The chain had already lost a quarter of its market cap since January.

Schnatter’s gambit didn’t work. PZZA shares continued their free-fall, and investors weren’t exactly buoyed when The Daily Stormer, a neo-Nazi white supremacist website, declared Papa John’s the official Pizza of the Alt Right, which forced the company to publicly declare that they don’t actually want the business of racists. (Especially since, as noted in the Washington Post, blacks consume 1.2 times as much Papa John's pizza as whites).

Over the next two weeks, the controversy grew. Domino’s, whose earnings were also down q over q for the fourth quarter, snipped “Nothing we reported in the quarter included commentary about the NFL because we saw no reason to call it out.” And Pizza Hut and Di Giorno took to Twitter to knock down Schnatter’s argument, saying THEIR pizza sales were going just fine (Pizza Hut’s parent company, Yum Brands ($YUM), is also headquartered in Louisville, KY, so there may be some home-town rivalry here).

And check out this side-by-side stock chart: That first week in November, it looks like every dollar pulled out of PZZA (lower line) went straight to YUM (upper line).

Papa John’s marketing team has done well in the past. In April, their Facebook mentions hit 61,501, due to a combination of buzz over new organic ingredients and a funny April Fool’s gag (about garlic sauce). Then in June, as Schnatter was sticking his foot in his mouth over local University sports issues in Kentucky, Papa John’s got some good buzz over a viral feel-good story: “Teen writes college essay on pizza, gets into Yale” (no, she didn’t actually write her admissions essay ON a pizza, she wrote ABOUT her love of Papa John’s).

Schnatter just seems to love giving his PR department a giant mess to clean up. In 2012 he sparked the first #BoycottPapaJohns by dissing Obamacare (complaining that he would have to jack up the price of his pizza – to the tune of 10 to 14 cents per pie! - in order to give his undeserving employees health insurance). That incident earned him a rare personal callout by John Stewart on the Daily Show. Then, earlier this year, Schnatter published "Papa: The Story of Papa John's Pizza," in which he said America was becoming as stifling to innovation as 19th century Germany, with regulations destroying the spirit of free enterprise and the free market.

But the NFL controversy was beyond anything he’d pulled in the past. As Black Lives Matter activists clashed with white supremacists on the pages of Facebook, Papa John’s Corporate sought a way out. You can see the Facebook mentions rising to a peak on November 13, with 41,259. Baseline tends to be around 10,000, so that’s a huuuge jump.

The next day, Papa John’s officially apologized via, of course, Twitter (the official voice of everyone from the President on down, these days). They said the company believes in free speech and peaceful protest and supports “the players’ movement to create a new platform for change. We also believe together, as Americans, we should honor our anthem. There is a way to do both.”

Short-selling of Papa John’s has been rising since 2014, and spiked after Schnatter’s comments. That might be a good investment strategy: Look for CEOs wading into the stormy waters of politics (especially ones who are the personal face of their product because they appear in all the company’s ads), and short their company’s stock.

But the biggest victim of the entire mess is probably Schnatter himself. At the beginning of 2017 he was thrilled to have finally made it onto Forbes' list of the world’s billionaires, based on the value of his stock holdings. By the end of the year, his worth had dropped to around $700 million. 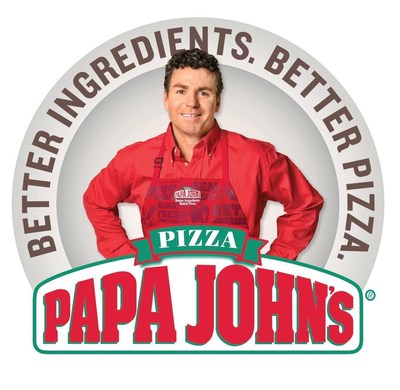 And just before Christmas, Papa John’s announced that Schnatter was resigning as CEO.

Chief Operating Officer Steve Ritchie picked up the reigns on January 1st. Without ascribing the change directly to the NFL controversy, Ritchie told the Wall Street Journal that it certainly didn’t help. “Clearly all of the PR things have been quite a distraction,” Ritchie told the Journal. “I want to put the focus back on our people and pizza.”

Now that he’s stepped down, Schnatter will have a lot more free time to devote to his political opinions. Maybe he’ll run for office? He’s still got plenty of money. His 9-million shares of PZZA may have dropped in value from $810 million at the beginning of the year to $513 million today, but that’s still enough to bankroll a run for Senate.