Join the investment community and start your week with market insights seen through the lens of alternative web data.
Innovation
6.7.19   8:17 PM Innovation

As shared scooters' popularity grow, so do the number of accidents. Both Bird Ride and Lime Bike have invested in safety-focused professionals. Here's who.

Stand-up, shared electric scooters are popping up in the world's largest cities seemingly overnight, and the inevitable is occurring: riders are getting hurt. Accidents and deaths are on the rise, and while official numbers are scant, the Associated Press estimates that at least 11 electric scooter rider deaths have occurred in the United States alone since 2018, nine of which occurred to riders on rented scooters from companies like Bird Ride ($BIRD) and Lime Bike ($LIMEBIKE)

As the weather heats up and more Bird and Lime scooters appear in the world's largest cities, more accidents and deaths are expected. While safety legislation lags and cities scramble to keep up with shared scooters' proliferation, job listings data indicates that both Lime and Bird have launched hiring efforts for safety and trust experts and execs.

While Bird's job openings data shows an ebb and flow with a significant hiring effort in late 2018, a keyword search for jobs with the term "Safety" in their title reveals that the company opened up several headcounts for professionals with a focus on keeping an eye on the company's image and technology when it comes to keeping riders alive.

Bird's openings for safety specialists included a "Head of Trust & Safety", a "Manager, Vehicle Safety", and others, in a clear sign that the company is keeping an eye on not just its image, but also the safety of its customers.

Lime Bike's safety-related positions — at least some of them — are still open. Lime's "Safety Officer" will design safety programs as well as take part in accident and industry investigations while employing "counter measures" on behalf of the company. 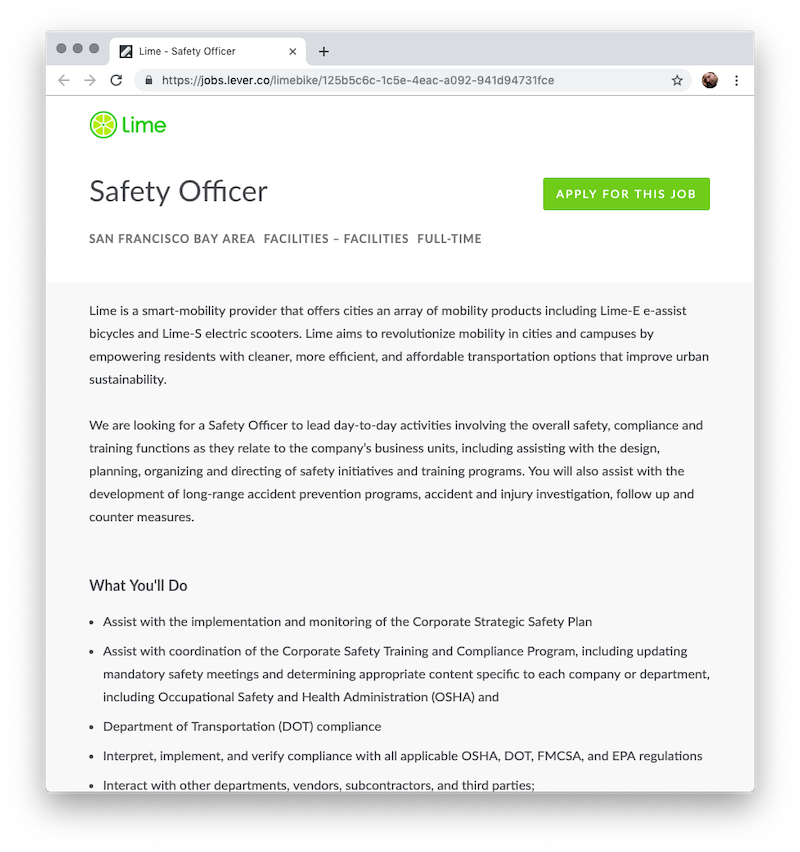