Join the investment community and start your week with market insights seen through the lens of alternative web data.
Innovation
10.9.18   2:12 PM Innovation

Just Eat conquers the entire United Kingdom, listing more restaurants on its service than both a young competitor in Deliveroo and American invader Uber Eats combined.

In the United States, Grubhub ($NYSE:GRUB) reigns supreme as the largest food delivery service by overall coverage area. However, it's a different story across the pond in the United Kingdom, the home of the world's fifth-largest national economy.

Around the same time as Grubhub's inception was the dawn of Just Eat ($LON:JE), the brainchild of five Danish entrepreneurs born in 2000 and launched in 2001. The company's headquarters moved to London, England in 2005, and received over £50 million in private funding before launching its IPO valued at over $2 billion in 2014.

Uber Eats made its first expansion to the United Kingdom in 2016, two years after Uber created its food delivery platform. It wasn't Uber's first foray into the European takeaway market; it opened up shop in Barcelona in 2015, was shut down, and later re-opened after it figured out the city's difficult black car transportation laws.

Since it started serving in the United Kingdom two years ago, Uber Eats offers over 7,500 restaurants for takeaway, mainly offering places located in the heart of the U.K's largest cities. 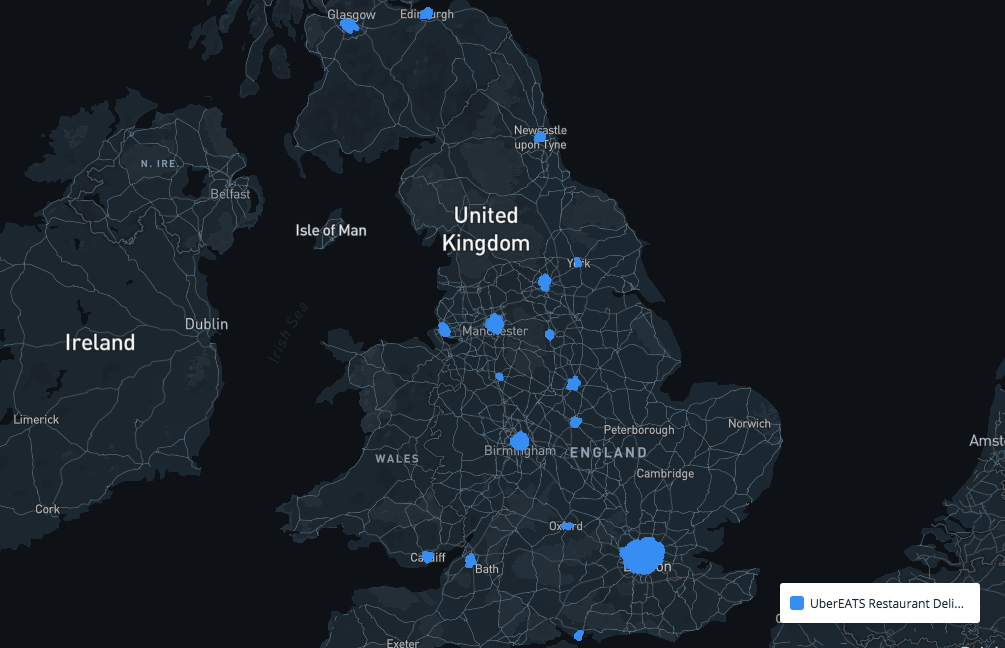 Deliveroo was founded in London in 2013 — eight years after Just Eat washed ashore from Denmark — and has grown considerably over the past five years. While only in the market for less than half the time of Just Eat, Deliveroo has considerable reach into nearly every major United Kingdom market, and even has some considerable expansion in the London metropolitan area.

This growth is set to continue further as the company announced earlier in June that restaurants with their own delivery riders can join the Deliveroo platform, which they predicted to add 5,000 new restaurants to the service. 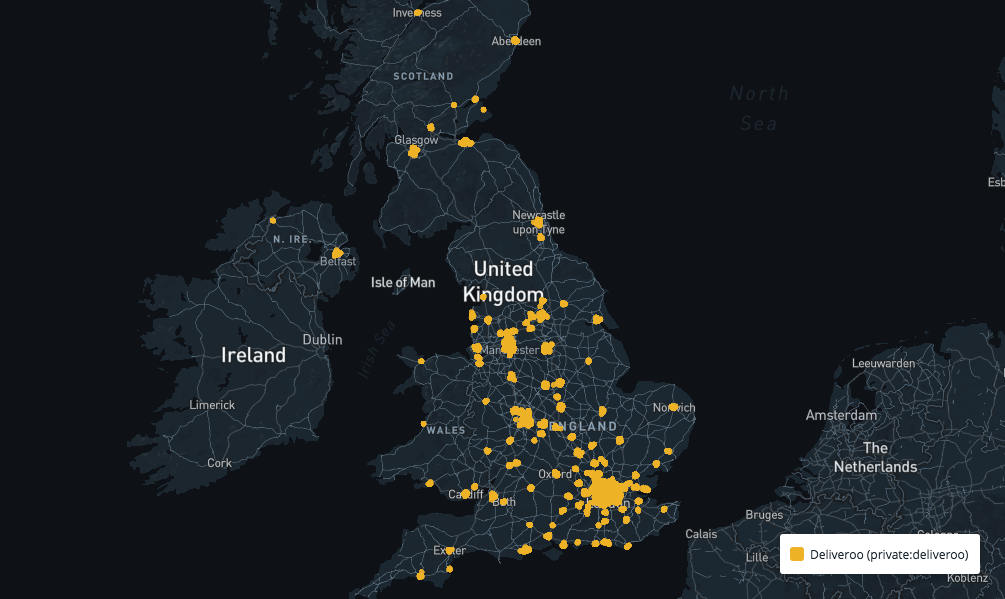 Although Deliveroo is growing fast, it still is far from beating Just Eat in a battle for their home turf. And even if Deliveroo and Uber Eats combined their offerings through an investment or partnership rumored to happen between the two companies, their 23,961 restaurants combined  falls nearly 5,000 short of all the places that deliver through Just Eat.

The takeaway king have long expanded past city limits and into suburban markets, as well as more of Northern Ireland, giving it the most customers by way of landmass and food choices.

On a micro scale, Just Eat overlaps coverage by its competitors Deliveroo and Uber Eats by a considerable margin, as well as offer more restaurants within a specific region. Take Newcastle upon Tyne, one of the ten largest cities in the country located in Northern England. Looking at all three takeaway services together shows how Just Eat has expanded more past Newcastle's limits and into the general metropolitan area... 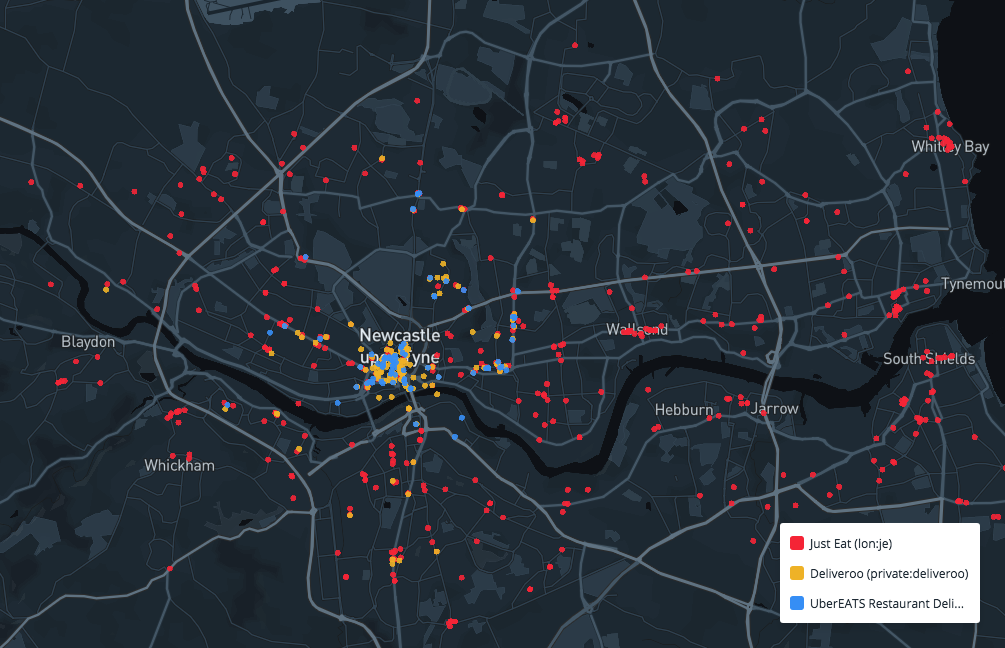 ... and another map of only Just Eat restaurant locations shows how the service still offers most, if not all, of the restaurants that Deliveroo and Uber Eats delivers from. 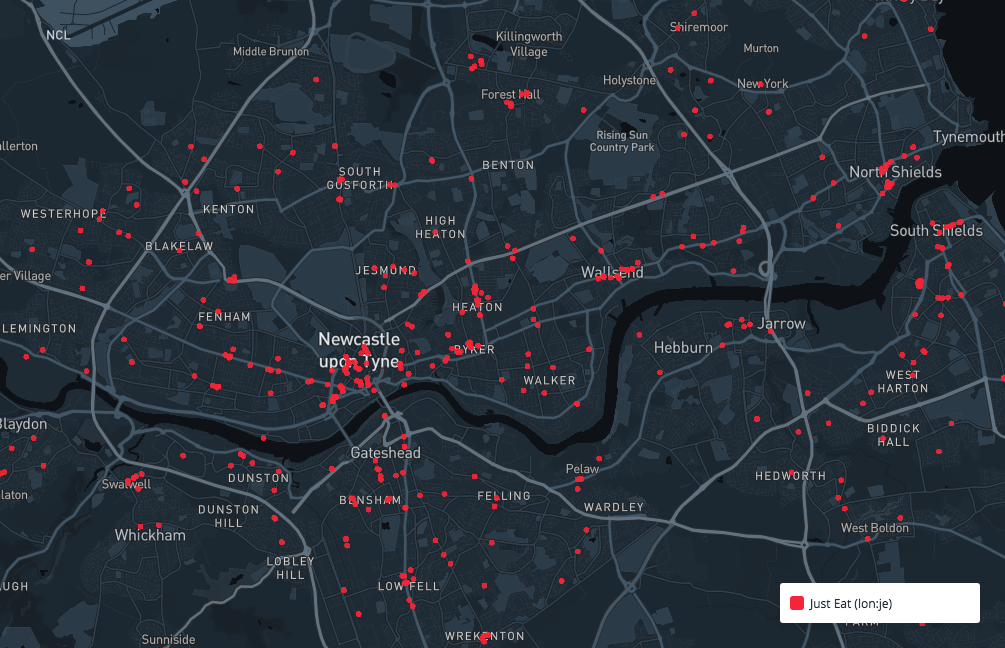 Just Eat currently wins the war on delivery prices too

Not only is Just Eat winning the land war, it is also outpricing its competitors.

When looking at the average delivery fees for all three services, Deliveroo charges customers £2.43. Meanwhile, Just Eat patrons only have to pay £1.03 in delivery fees. Uber Eats is not tracked, but according to its website, it's "a flat $5.99 plus any applicable taxes." in London.

A pound and change may not seem like much, but over time, that adds up to an extra meal or two during a month, which smart consumers begin to realize if they are frequent gourmands but wish to stay in the comfort of their home or office.

And, as a small footnote, Deliveroo and Uber Eats drivers recently protested alongside McDonalds and Wetherspoon's employees for better wages. Some couriers are demanding £5 per drop and £1 per mile as a minimum rate, which could further eat into current delivery prices.

Just Eat is feasting on current competitors, and if anyone else wants to start up in the U.K. — or if Deliveroo and Uber Eats want to dethrone it— then they will have to overcome one beefy and price-efficient takeaway titan.