Join the investment community and start your week with market insights seen through the lens of alternative web data.
Markets
3.26.19   7:05 PM Markets

Target has Walmart Surrounded in Illinois, California, and Philly

Thanks to new proximity data, we're able to see where Target is surrounding its biggest rival, Walmart, across America.

Walmart ($NYSE:WMT) and Target ($NYSE:TGT): Two big-box behemoths that have come to be icons of the modern retail landscape.

In the United States, these two mega retail corporations dot a map like a population density graph — there's always a Walmart or Target nearby.

Today, however, we're able to go a bit more in depth into this long-standing retail rivalry and uncover the battlegrounds where Target, regarded as the smaller retailer by pure footprint, is showing strength in numbers with footprint strategies that look more like strangle points than store locations.

With a new feature recently added to our data lab, we're not only able to see the closest Target to a Walmart, but also the second, third, fourth... And fifth.

If there are five stores within a reasonable distance to a competitor, it's safe to say that the competing store is surrounded.

And according to proximity data, Walmart appears to be surrounded in Philadelphia, Cook County, Illinois, and parts of California.

Specifically, for the Walmart Neighborhood Market located on 2844 N Broadway St in Chicago, there are five Targets that compete with the store within a radius of just 2.11 miles, or just a few minutes by car.

Here's how it compares to the other nine Walmarts that have plenty of competition with Target, as well as the exact locations for all these Walmarts and fifth-closest Targets.

You can see exactly where these stores are by exploring on our interactive map, and you'll see for yourself how Target and Walmart are competing for millions of consumers within a few miles of each other. 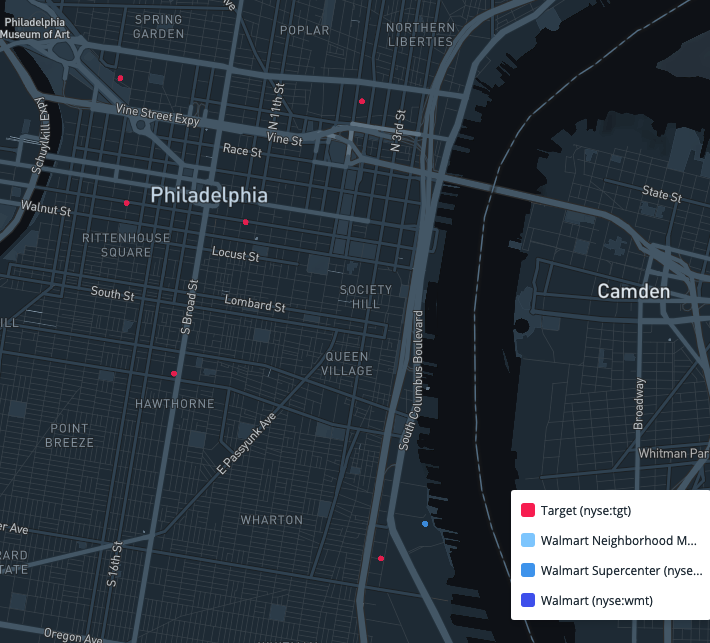 According to Google Maps, it takes about 15 minutes to walk between the Walmart on South Columbus Blvd. and the nearest Target. The second nearest Target, on Broad Street, is about 12 minutes with the usual traffic. The next closest Target near City Hall on 1128 Chestnut Street is about 20 minutes away each. The fourth on 456 N 5th Street is only 11 minutes away despite being nearly three miles away, but that's because it can be accessed from South Columbus Blvd.

The fifth closest Target, on 1900 Chestnut Street, is also about a 20 minute drive.

Five Target stores, all within a 20 minute drive from a Walmart. This probably means that Philadelphia is one hotbed for customers at big box retailers, as Target is stacking the deck against Walmart here.