Join the investment community and start your week with market insights seen through the lens of alternative web data.
Tech
1.23.18   6:49 PM Tech

How to lose a billion dollars? Bet against Tesla (when they're bouncing back bigly)

With Model 3s arriving in dealer showrooms, an uptick in hiring, and an uptick in stock price, Tesla is booming.

Earlier in the month, we reported that Tesla ($NASDAQ:TSLA) was having a bumpy road. There was trouble on the production line that caused them to miss their targets for manufacturing Model 3s and they missed their financial targets. As a result, their share price was skidding. Considering all those things, the smart money said "short sell!". In fact, Tesla had the distinction of being the single-most short-sold stock on the market.

As of this week, those smart money boys were out $1 billion and counting after Tesla bounced back.

Elon Musk warned them. He said investors who short-sold Tesla would be in for "A tsunami of hurt." And boy, was he right.

First, the job numbers. In our article we questioned why, when Tesla was gearing up for a major production push, our data showed they were eliminating hundreds of jobs. Well, over the past two weeks those numbers have turned around. After a screeching halt in December, new job openings are rising fast.

And share prices have turned around, too, driven by enthusiasm for the (somewhat delayed) national roll-out of the Model 3. They've pushed back through $350, and could be testing that $400 ceiling again.

(Data from EdgarOnline via NASDAQ)

And boy, has that cost the doubters a lot of money.

Writing at electrek, Fred Lambert (@FredericLambert) is amused to note,

Back in 2012, CEO Elon Musk commented on the short interest on Tesla’s stock and warned that anyone holding a stock position against the company will have a “tsunami of hurt” coming for them. During the 12 following months, Tesla’s stock price increased by 461% – much of which was attributed to a short squeeze after Tesla reported its first quarterly profit in Q1 2013.

He adds that last year short-sellers lost almost $5 billion, and references Ihor Dusaniwsky's statement that the shorters have racked up more than a billion dollars just since New Year's.

"But Tesla has only ever shown 2 quarters of profitability!" the nay-sayers exclaim. How can an unprofitable company be worth so much?

Leaving aside every dot com in history - Twitter ($NYSE:TWTR) finally had a profitable quarter last year, and they don't actually manufacture anything, other than tweets; Snap ($NYSE:SNAP) has never shown a profit - Tesla has pored massive investment into disruptive technologies that drive big revenue jumps, but rather than settle for profitablility in the near term, they pour everything right back in. As Musk said two years ago,

We’re going to spend staggering amounts of money on capex. I mean, for good reasons, and with a great ROI. And it’s important to not look at capex in isolation, because that capex obviously is being done for reason, in order to capture substantial future revenue flow.

Tesla's operating expenses run ahead of its gross profit because it is aggressively investing in the sources of next year's gross profit, and of gross profit years down the road.

... Every year, Tesla (TSLA) makes investments that won’t start generating gross profit until the next year or multiple years down the line ... All of these investments show up as operating expenses on Tesla’s income statements.

...The compound annual growth rate (CAGR) of Tesla’s gross profit over the last 5 years is 91.8%. That’s faster than Facebook (FB) and Amazon (AMZN) combined.  Tesla is one of the fasting growing companies in the world, and possibly the single fastest growing manufacturing company. Its gross profit has been growing at a rate over twice as fast as Moore’s law.

He sees a huge upside for the company - it's currently valued at around $60 billion, but he sees it growing to $600 billion or more in ten years.

Which is just about exactly the number that Elon Musk appears to be banking on, too, in his newly announced compensation package.

Talk about gutsy - the guy has signed on for a deal in which his salary is exactly ZERO dollars. Everything he earns is tied to a series of revenue and profit targets, rising in $50 billion increments to $650 billion.

Considering Tesla's current value of a mere $60 billion, you might consider that an impossibility. But as the AP points out,

Musk has worked under similar all-or-nothing conditions before. Under a 2012 agreement, Musk's stock options vested only if Tesla's market cap continued to rise in $4 billion increments. The company also had to hit matching operational milestones, including vehicle production targets and developmental milestones tied to the Model X and Model 3 programs. Tesla wound up reaching all of the market cap milestones and nine of the 10 operational milestones.

When that pay package was created, the company was worth just $3.2 billion. Its market cap at the end of last year was 17 times that amount. 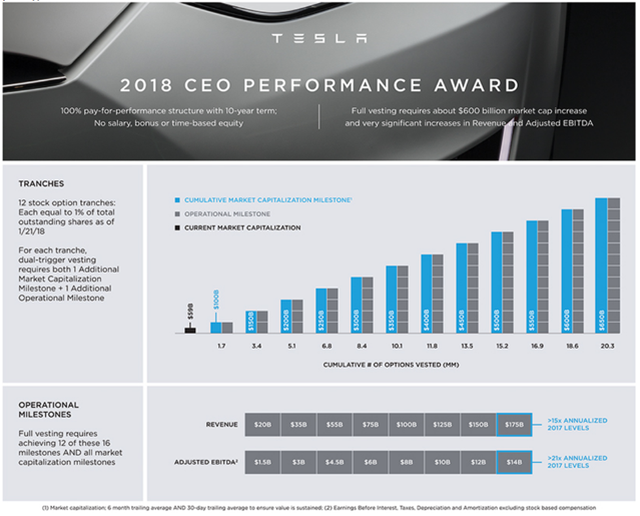