The ambitious, bold and hungry start their week with The Business of Business!
Features
9.17.20   12:56 PM Features

People are willing to pay a lot to find their souls. But will their love for tap-backs persist in the face of the pandemic?

If you work out (or know someone who does) you’ve probably heard of SoulCycle, the boutique indoor cycling company with fewer than 99 locations, but a brand presence that stretches beyond the studios and around the world. SoulCycle is known for it’s cult-like following, through classes that elicit obsession, all-consuming passion, and even a hypnotic state (perhaps from a combination of endorphins, candlelight, and a well-known grapefruit scent emanated from said candles).

It might sound a little over-the-top, but that’s because over-the-top is exactly what SoulCycle is, and why the luxury workout gets so much hype (and flak) from far and wide. Whether you love it or hate it, SoulCycle has maintained relatively steady growth on social media throughout the years, which is just one testament to its loyal fan base.

Here’s a brief history of how SoulCycle came to be, what’s got riders so eager to find their souls, and why the brand’s been on a bumpy ride since the pandemic hit.

It began with a “blind date”

Rewind to 2006: Spin instructor Ruth Zukerman introduced two of her clients — Elizabeth Cutler and Julie Rice — to one another and they immediately hit it off. “It was the best blind date we’d ever been on,” Rice has often said about their lunch at Soho House. The three went on to found SoulCycle a mere four months after their meeting. It was a seemingly perfect match: Zukerman’s experience teaching spin lent itself nicely to Cutler’s desire to find (or, create) a luxury indoor cycling option since she moved to New York City. Rice saw the possibilities in charging clients by the class, and rest was history.

Based on SoulCycle’s popularity, you’d probably assume the brand quickly went from grit to glam, but that wasn’t exactly the case. The first studio had just 33 bikes, according to The Cut, and was set up in a former funeral home the women had found on Craigslist; the front desk, an Ikea set-up in the back of station wagon parked in front of the Upper West Side studio, and the now widely-regarded SoulCycle logo, painted on a rickshaw that also sat out front. Not exactly the pristine studios you’re used to seeing with motivational quotes on the walls and 50+ bikes per class, but it did the trick to get people hooked. One year later, a second SoulCycle studio was opened in the Hamptons and was met with immediate success.

A culture of cliques and front-row fanaticism

Come 2009, Zukerman left Cutler and Rice behind in their executive roles and stepped away from SoulCycle to found its biggest competitor, Flywheel, just one year later in 2010. The why? She wanted to get away from the very ambiance she helped create. “The cultures at SoulCycle and Flywheel were completely different. At SoulCycle, we very quickly became the club you can’t get into, and that has a lot of appeal to a lot of people,” Zukerman said on the Wharton Business Daily podcast. “When we started Flywheel, I wanted to go in the complete opposite direction, purely because it was more of who I am and I wanted those other people to have a shot at it. So we tried to make it as open and welcoming to everybody as possible.”

But that’s just it about SoulCycle: Loyal riders love the exclusive nature and “tribal experience” that comes with taking a class not many can afford, and even fewer might excel at. To maintain an air of us-and-them, there’s a rather high barrier to entry to finding your soul. Unlike Flywheel, SoulCycle does not offer memberships. Instead, you’ll be charged between $30-$36, depending on studio location, for each class, and you’ll want to grab a few more dollars on your way out the door if you plan on renting shoes and purchasing water.

You’ll likely want to book your class online, too — if you want to get your bike of choice, that is. Classes for the week ahead open up each Monday at noon, and the most dedicated riders are known for marking it on their calendars and grabbing their spots right away (the phenomenon is so widely known amongst regulars that SoulCycle sold a “Monday at Noon” shirt at one point).

Keep in mind, you probably (read: definitely) won’t want to grab a front-row bike if you’re a first-time rider or are still getting the hang of busting dance moves, maneuvering dumbbells, and peddling all at the same time. While anyone can book a front row seat, it’s typically “reserved” for the best riders who can keep up and practically complete the dance moves in their sleep. Some instructors go as far as pre-approving clients who can ride in the front, according to a New York Times report, and encouraging newbies to head to the back. The writing on the wall is a little gentler (yes, there is literally writing on the wall outlining class etiquette): “There is a direct correlation between your energy and your neighbor's ride. If you want to do your own thing, please don't ride in the front row."

If you’re willing to pay up and can handle the pressure of the front row (or the sting of getting bumped to the back), then SoulCycle might be a good fit. After all, regular riders claim it’s become their happy place, provided them with therapeutic and spiritual experiences, and in some cases, helped them cope with addiction. Celebrities swear by it, too, and if you’re lucky you might run into David Beckham emerging from an early morning class.

But there’s also those who can’t be persuaded by the elitist culture, and even former riders who exited the dimly lit studio, saw the light, and never looked back.”While this may not be true for all of the clientele, there's something about being shoved to the back of a room amid a sea of perfectly sculpted and tanned women with massive diamond rings, clad in SoulCycle's signature apparel, that doesn't make you feel great,” Mallory Schlossberg, a former SoulCycle enthusiast, wrote for Business Insider. The crowd that SoulCycle attracts — paired with the fact that experts are hard-pressed to deem the class entirely safe or effective — has pushed people like Schlossberg away for good. But yet, SoulCycle persists.

The spread of soul

After opening two additional locations in New York City and an additional studio in Scarsdale, New York in 2010, SoulCycle was acquired by Equinox in 2011, which effectively led to studios popping up in well-to-do areas around the U.S., like San Francisco and Greenwich, Connecticut.

Shortly after, the company released the SoulCycle bike, which was known for its extended handlebars, sturdiness, and bright yellow color. Since then, there have been several iterations of the stationary bike, with design changes to enhance comfort and make for a smoother ride. Like SoulCycle classes, the equipment doesn’t come cheap: a single bike runs upward of $1,600.

In 2015, SoulCycle announced it would raise $100 million in a public offering with which it would pay down debt and open even more studios. After dragging its feet for three years, the company then announced in 2018 that it would withdraw its IPO request due to “market conditions,” CNN Business reports. The claim was met with skepticism; industry leaders believed it had much to do with competition from up-and-coming indoor cycling brands like Peloton.

This wouldn’t be the last time SoulCycle felt the burn from Peloton.

While SoulCycle’s affiliation with Equinox certainly helped the brand expand far and wide (by 2018, the brand made its way overseas and opened studios in Canada and the United Kingdom) it also resulted in backlash. In 2019, Stephen Ross, a billionaire real estate developer and majority owner of The Related Companies (AKA, Equinox and SoulCycle’s parent company) hosted a fundraiser for President Trump where attendees were charged anywhere from $100,000 to $250,000 for tickets.

On top of leaving a bad taste in customer’s mouths, Ross’s decision to host the fundraiser went against the very mission of SoulCycle, which involves welcoming “all souls” and tolerance.SoulCycle trainers were also shocked to hear of the event; in fact, “numerous instructors, many of whom identify as LGBTQ and nonwhite, and who are paid to spread a message of positivity and welcomeness, felt frustrated, blindsided, and hurt by the news,” Vox reported. Though then-SoulCycle CEO Melanie Whelan put out a statement on Instagram explaining that the company did not support the event, many trainers and riders alike weren’t satisfied with the response. Thus, a boycott ensued. Loyal riders decided to cut back on tap-backs and stay away from the studios they had come to know and love. 18 days after the fundraiser was announced, data showed that class sign-ups had decreased by nearly 13 percent. 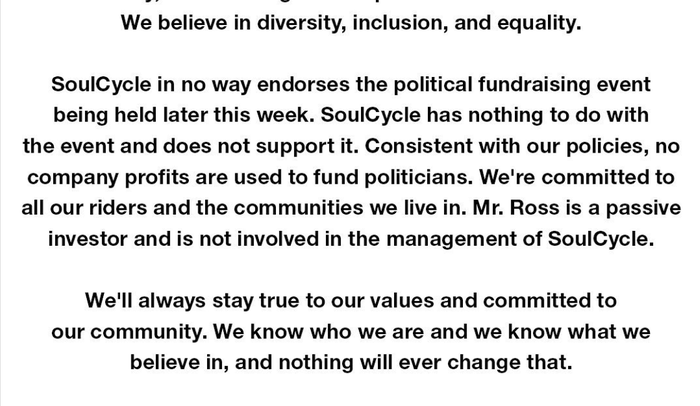 Cue: 2020, the coronavirus pandemic, and SoulCycle’s late-to-market bike developed in partnership with Variis, a digital platform and fitness app that would allow the company to stream its classes. As the pandemic pushed riders out of the studio and into their homes, they longed for a way to find their souls within their own four walls. And as the release of SoulCycle’s long-awaited at-home bike was pushed later and later, Peloton stepped up to take its place.

The SoulCycle At-Home Bike was released in early May — six months later than expected, the New York Times reports —  which gave Peloton the perfect opportunity to tap into desperate riders who were more than ready to get back on their bikes. And the data confirms it: not only did Peloton see a 66 percent increase in revenue compared to this time last year, but also a boost in social media followers as SoulCycle’s follower base stayed relatively flat.

It remains to be seen whether the long-standing industry favorite will revive its soul and come out on top, or continue to lose traction to Peloton. While SoulCycle’s at-home bike doesn’t seem to be making its way into as many living rooms as Peloton, the company is beginning to offer private customized classes as well as outdoor classes as a way to keep riders interested and engaged. But not even the pandemic will push the company to give its customers (and their wallets) a break: prices for private instruction start at $1,200 a pop. How SoulCycle of them