Join the investment community and start your week with market insights seen through the lens of alternative web data.
Markets
7.23.18   6:22 PM Markets

By looking at everything from Facebook likes to Twitter followers and store locations, we measure up America's biggest pizza chains.

New Yorkers get the dollar slice. Chicagoans get the deep dish pie they call pizza. And pizza purists in New Haven, Connecticut are still locked in a war between Pepe’s and Sally’s for who has the better coal-fired apizza (pronounced “ah-beets.”)

Whether you are in a pizza mecca or out in the forests of Montana, there always seems to be a Domino’s ($NYSE:DPZ), a Papa John’s ($NASDAQ:PZZA) or a Pizza Hut ($NYSE:YUM) around the corner or a phone call away.

These three brands — the modern-day giants of American pizza — have locations in the rest of North America and five other continents.

But when it comes to cold, hard data, which brand is winning the pizza-chain war? By looking at everything from store locations to social momentum, we begin to gain an understanding of how these three brands are doing.

In the contiguous 48 states, the three largest pizza chains stretch from border to border with over 16,000 locations combined. As of July 23, Pizza Hut, a subsidiary of YUM! Brands (along with Taco Bell and Kentucky Fried Chicken), has the most storefronts, beating Domino’s by just over 705 pizzerias and eclipsing Papa John’s with 64 percent more locations.

Since we're talking pizza, it's appropriate to show the above store breakdown as a pie chart. 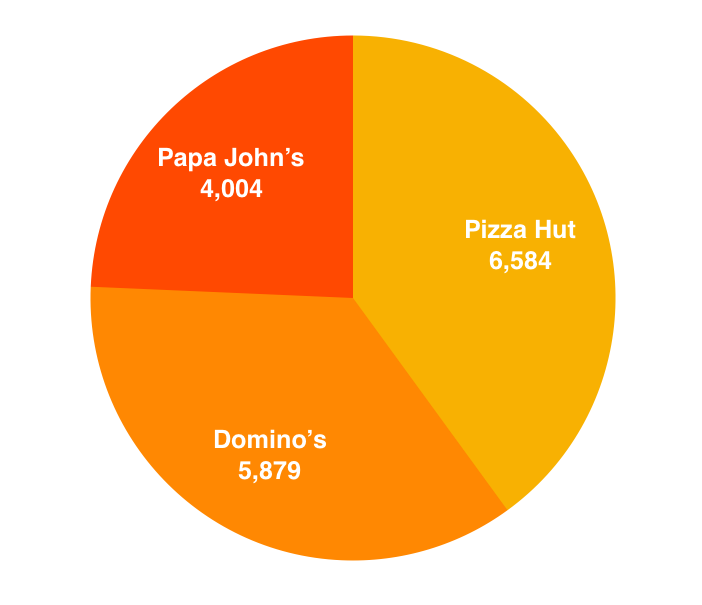 Granted, Pizza Hut had a head start in the pizza delivery race: Dan and Frank Carney began firing up their pizza ovens just outside of their alma mater Wichita State in 1958. That's 7 years before Tom and James Monaghan renamed DomiNick’s in Ypsilanti, Michigan to Domino’s, and over 2 decades prior to Papa John Schnatter staking his claim in the take-out pizza game.

The state of states

Pizza Hut may be winning the war, but they cannot claim a total monopoly over their younger rivals. For example, Pizza Hut currently has the most stores in Houston, where there are the most chain pizzerias out of any city in America.

Looking further out west, however, Domino’s has the slight edge in the battle for Los Angeles.

And, in the Sunshine State, Papa John’s has more locations from the outskirts of Disney World to the Floribama Shore.

Thinknum subscribers can see more of this data – and see other international locations tracked by our software – here.

Outside of brick-and-mortar locations, each pizza brand has built up a following on Twitter and Facebook, which can give some insight to their relative popularity. All three franchises founded their Twitter accounts within three years of each other, and while Pizza Hut and Domino’s are in a close race for followers, Papa John’s is getting kneaded and pounded by its competition.

(The slight dip in all accounts’ followers can be explained by the early July Twitter purge of locked users, which affected a vast majority of companies.)

On Facebook, Pizza Hut has found its secret sauce, drawing in 10 million more likes than Domino’s. As for Papa John’s… they seem to be lost in the sauce without any meat to their Facebook presence.

Along with garnering the most likes, Pizza Hut is dominating when it comes to how Facebook uses location data based on posts and selfies in its "Were Here" count. It seems that Pizza Hut lovers want to share their family dinners and 3 a.m. snack sessions more than Domino’s and Papa John’s fans, visiting Pizza Hut six times more than those who check into two of their competitors combined.

As we reported earlier in July, the PR firestorm that continues to surround Papa John’s and its founder will make it especially tough for the chain to gain ground on social media. And although Domino’s is going pie-for-pie with YUM! Brands’ pizzeria, the data shows that in America, you can’t out pizza the Hut.

This startup is helping small businesses compete with giants like Amazon

The Nickel Queen: How Ashley Zumwalt-Forbes climbed to the top of the electric vehicle battery industry

Ashley Zumwalt-Forbes went from being the first in her family to attend university to making the Forbes 30 under 30 list in just 12 years.
Danny Konstantinovic 7.31.20   6:00 PM
People

Rental or resale? The pandemic might kill Rent the Runway, but Depop will thrive

Can dating apps like Tinder and Bumble survive the pandemic? Here's the data

While social distancing is great for public health, it’s hurting the dating game. Dating apps like Tinder, Hinge, and Bumble have rolled out new features in recent months to entice users and weather the pandemic. But will users keep swiping right?
Andrew Hirschfeld 7.30.20   6:00 PM
Innovation

With the pandemic spreading and college sports on hold, who wants to go to Buffalo Wild Wings?

Nobody has a craving for BWW's hot wings.
Danny Konstantinovic 7.30.20   4:00 PM
Innovation
View All