The ambitious, bold and hungry start their week with The Business of Business!
Innovation
10.7.20   1:30 PM Innovation

A few years ago, brands were scrambling to get their products onto the channels and grids of YouTube and Instagram’s most followed. Recently, their marketing teams found out about TikTok.

Two years ago, TikTok went by the name of “Musical.ly” and no one over the age of 17 had ever heard of it. Now, creators who’ve made their name on the bite-size content app are fronting massive marketing campaigns and product launches, especially since TikTok opened up to advertisers in November 2018. The biggest example so far is “The Charli,” a Dunkin’ Donuts drink named after and rolled out with a promo campaign courtesy of TikTok’s most followed creator, 16-year-old dancing sensation Charli D’Amelio. D’Amelio was also tapped for Sabra’s Super Bowl ad and alongside her sister Dixie, also a TikTok star. They’ve also fronted campaigns for Morphe and Hollister.

The theory is that this new type of influencer brings millions of Gen Z shoppers in their wake, a demographic that brands are perplexed by and desperate to attract. But marketing on TikTok is a delicate art form since Gen Z notoriously hates marketing. Advertising as a concept grates against TikTok’s ethos of unfiltered, raw, messiness, compared to Instagram’s polish. You aren’t going to go viral just from paying a teenager to do a set of dance moves. Here are five companies that have TikTok figured out, and turned views into sales.

The official beverage of TikTok

Thanks to D’Amelio’s fans, Dunkin’ Donuts sold “hundreds of thousands” of drinks within the first five days, said VP of brand stewardship Drayton Martin. The drink — a medium cold brew with three pumps of caramel and whole milk — boosted Dunkin’ cold brew sales in general by 45% the day after.

On launch day, downloads of Dunkin’ Donuts’ app surged 57%. Since loyalty program members on average spend 67% more than regular customers according to Loyaltylion.com, this frenzy is likely a part of why Dunkin has beat earnings estimates for each of the last four quarters according to The Motley Fool. The outlet also reports the chain has seen its stock bounce up 8% since “The Charli” launched on September 2nd. 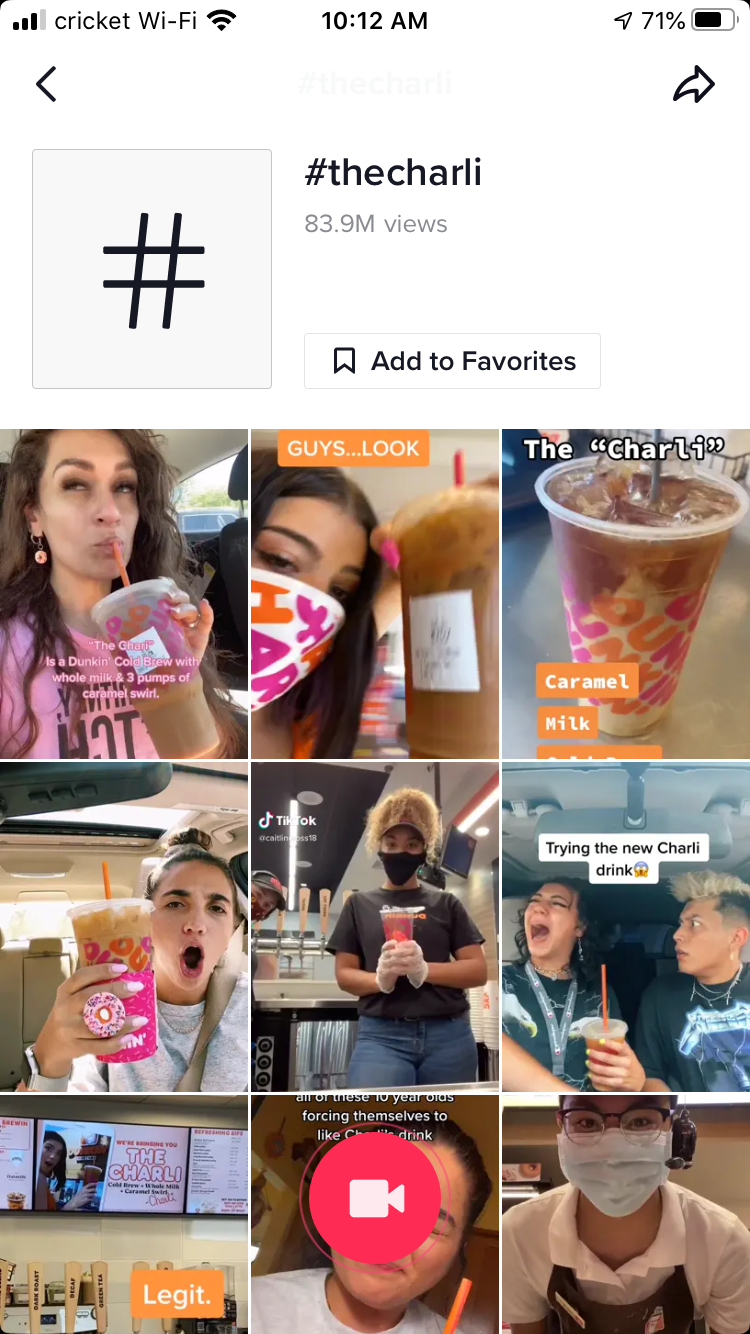 There are few brands that have invested as much in TikTok as American Eagle, which is suited perfectly to the normcore aesthetic of the platform’s biggest stars. AE was one of the first companies to lean into the app, according to MobileMarketer, launching their first TikTok campaign for the 2019 back-to-school season to promote the AE x Young Money fall collection. Users were encouraged to post themselves wearing the brand’s clothes while dancing to Lil Wayne’s “Uproar.”

Last spring, during lockdown, D’Amelio helped Aerie generate 2 billion impressions on the platform with the #AerieREALPositivity “challenge” in which the dancing teens bopped around pointing to text captions outlining the “ways they’re staying positive” in lockdown. The early months of lockdown were brutal for retail, but the campaign bolstered American Eagle digital sales by 33% and Aerie sales by 75% year-on-year in the first quarter, reports MobileMarketer. In Q2, Aerie’s digital sales grew by 113% and American Eagle followed with 21% digital growth — Motley Fool says it’s clear Aerie is the brand’s “future.”

This summer, D’Amelio sisters defected to Hollister’s campaign, so Addison Rae was tapped by AE instead for a back-to-school campaign shot mostly using TikTok, Zoom, and iPhone photography. Users could submit TikToks with the hashtag #InMyAEJeans to win a “duet” (a popular format where one user parodies or remixes another in side-by-side clips) with Rae. 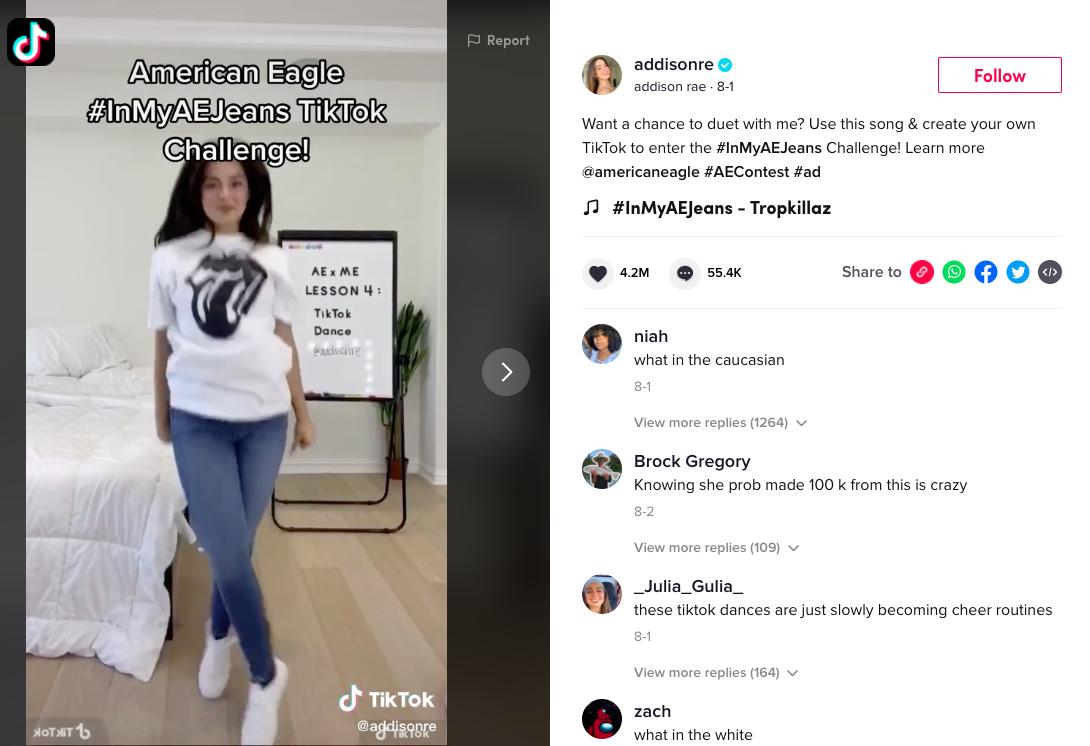 It’s looking like the brand’s investments in TikTok are paying off. American Eagle’s shares jumped 17.4% in September, which Motley Fool attributes to “ pushing the digital retail envelope.” American Eagle’s net sales fell in Q3, potentially thanks to remote learning and delayed school start dates, while Aerie’s sales rose 32%. Looks like Victoria’s Secret should get on TikTok.

Of all the brands to be thriving on TikTok, Kroger was the first ever to host a shoppable campaign using TikTok’s in-app shopping “Hashtag Challenge Plus” feature for their #TransformYourDorm back-to-school campaign in August of 2019. The campaign starred four TikTokkers, Joey Klassen, Cosette Rinab, Mia Finney and Victoria Bachlet who showed off before and after shots of their dorm rooms stocked with electronics, appliances, clothes and groceries.

The idea was to get Kroger in front of teenagers as they go off to college and solidify their shopping habits. The campaign saw over 800 million views, 304 million user-generated videos using the hashtag, and a 16.7 engagement rate according to the Shorty Awards. According to the brand lift survey conducted within TikTok after the campaign, people were 9% less likely to identify Kroger as “primarily a grocery store,” positioning it right where it wants to be, alongside Target or a Walmart, in the eyes of young consumers.

Somewhat surprisingly, the campaign made inroads on Facebook, boosting Kroger’s “Talking About” count from 16,000 to 43,2000 on August 17, the day the campaign ended. Most importantly, Kroger ended 2019 with their digital sales up 22% and kicking.

Chipotle’s TikTok presence started organically when employees filmed themselves flipping burrito bowl lids into the air and catching it on the bowls. The #LidFlip challenge was born. Capitalizing on the momentum, Chipotle pulled off the highest-performing hashtag challenge in 2019 #GuacDance challenge — in which teens ironically dance to a song about guacamole by children’s musician Dr. Jean — to boost sales for their free guac giveaway for July 31, National Avocado Day. It became the company’s biggest National Avocado Day since they were founded in 1993, with 800,000 free sides of guac served alongside (non-free) burritos.

The company followed it up with the #Boorito Halloween challenge and #ChipotleSponsorUs, hosted by creator David Dobrik, who got users to make more than 2.7 million videos competing for a year of free Chipotle. Considering Gen Z forms nearly half of Chipotle’s customer base and 24% of them order out 3-4 times a week (more than any other generation), Chipotle has a lot to gain from being TikTok famous. Yahoo Finance suggests that Chipotle’s most recent TikTok campaigns contributed to their 4% share jump this summer. 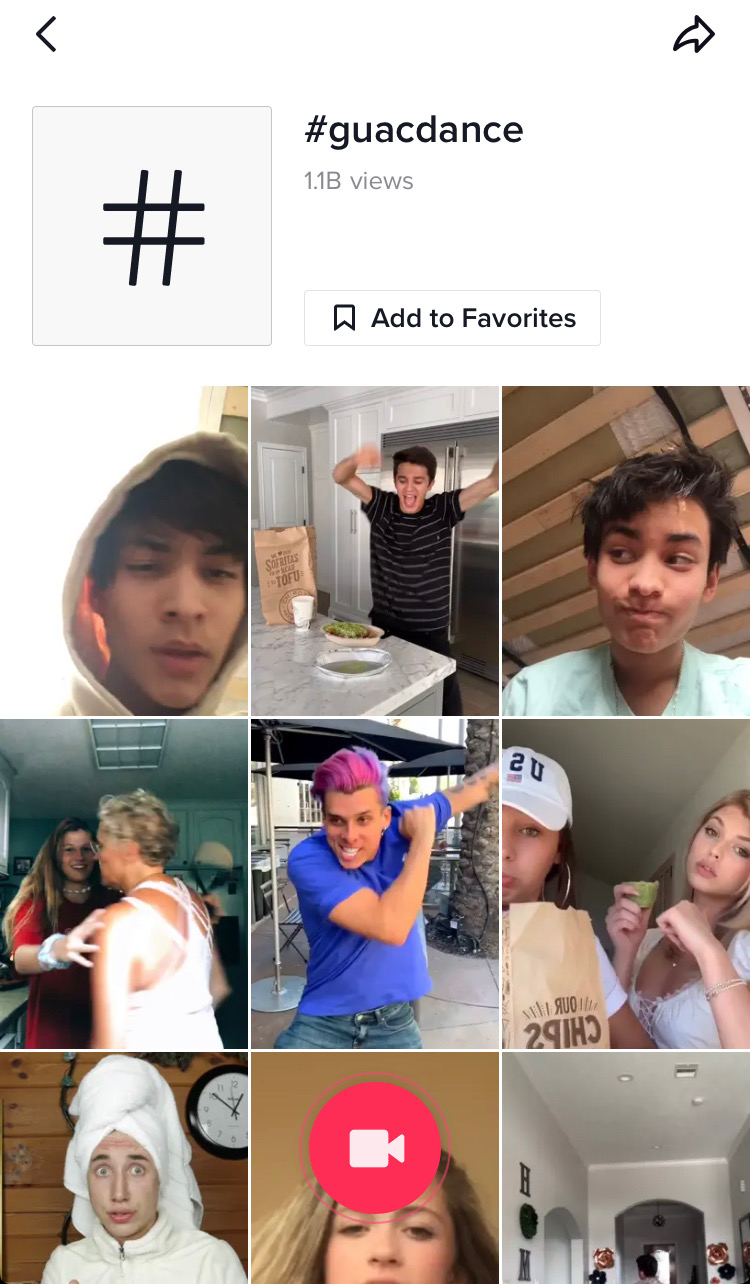 E.l.f. became a Gen Z success story when they commissioned “Eyes Lips Face” from Florida rapper HollaFyeSixone in fall 2019. Sponsored content had barely begun appearing on the platform when Brittany Broski lead off the song-dance challenge: #EyesLipsFace (the acronym the company’s named for). The hashtag racked up 1.6 billion views in a week according to AdExchanger, becoming the fastest video to reach 1 billion and the first-ever ad to hold the No. 1 trending spot on the platform.

AdWeek called it “The most influential campaign on TikTok” even before E.l.f. rebooted the challenge as “#EyesLipsFaceSafe,” a hand-washing anthem when the coronavirus pandemic broke out. In May, they followed up with #ElfVanishingAct to promote their top selling product, the Poreless Putty Primer and launched a collab with fellow TikTok juggernauts Chipotle: a “make-up burrito.” 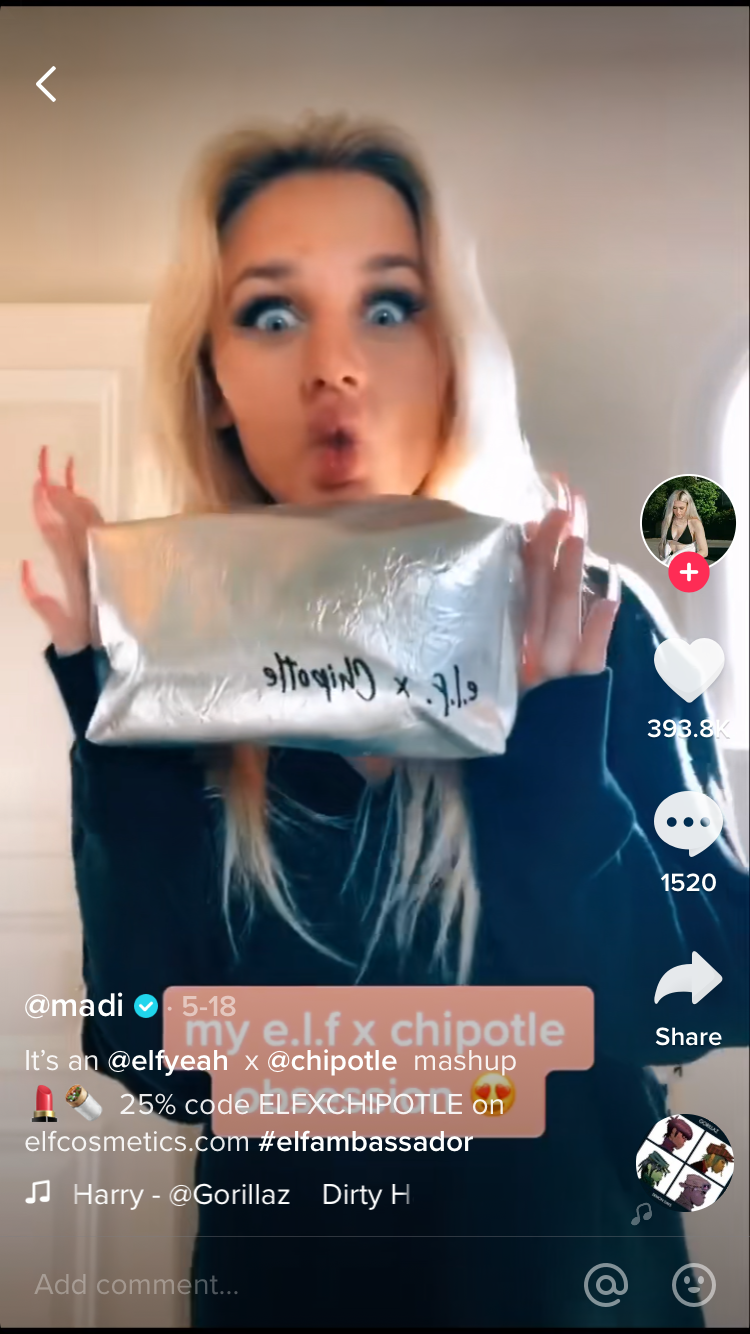 Most recently, e.l.f. launched the first ever TikTok reality show under the name of their famous hashtag, in which users submit videos to be judged by beauty TikTokkers Avani Gregg, Madi Monroe, and Seth O’Brien.

TikTok changed everything for e.l.f., sales of which were slumping in late 2018. They saw four quarters of straight growth over the course of 2019. In September, their shares had completely recovered from Covid-19’s rampage on the stock market, and miraculously perked up to 13% year over year. While most of their growth has been on TikTok, they’re also up 40,000 followers on Facebook from 2019.

This year, according to Piper Sandler’s annual survey of teens, e.l.f. ranked as teenagers second favorite make-up brand. This has made the company resilient during the pandemic. While L’Oreal, Esté Lauder, Revlon and Coty’s sales are down 11.7%, 32%, 39% and 60% respectively in the second quarter according to AdAge, e.l.f.’s sales rose 8% and took over another 1% in their US cosmetics market share. Adult women might be buying less make-up but teenagers don’t need any more reason than picking up their phone to put on a full face.

There’s one downside to e.l.f.’s recent strategy. Their success has been so tied to TikTok that according to AdAge, the company’s share price has wobbled this summer as the Trump administration attempted to ban TikTok and other Chinese apps. Apparently, TikTok has until November 14 to close their deal with Oracle and Walmart, their new American keepers who’ll keep the app operating in the US. If everything goes well, e.l.f., Dunkin’, the D’Amelio girls and the rest should be able to keep raking it in until the next app comes along to dethrone TikTok. E.l.f. CEO Tarang P. Amin says the company’s planning a campaign for Instagram Reels next.