Join the investment community and start your week with market insights seen through the lens of alternative web data.
Tech
5.21.19   7:00 PM Tech

Apple is serious about augmented reality: hiring for AR is up 30x that of last year

Hiring for AR pros at Apple are at an all-time high as the company pushes its ARKit platform.

On May 1, 2018, Apple ($NASDAQ:AAPL) was hiring for just one position focused on AR, or Augmented Reality. But then one month later, in June 2018, the company showed off SwiftShot, an AR multi-player game developed with the company's ARKit 2 that ballyhooed persistent and shared AR experiences along with new levels of object detection.

Since that demo, hiring at Apple for AR experts has grown from a humble 5 open positions to 33 as of this week.

The hiring upswing is a clear sign that the Cupertino tech giant is looking to make AR a major part of its mobile iOS devices moving forward. A word-cloud analysis of openings for AR since 2016 shows a clear move from R&D to market research, resale, and retail applications.

Gaining an understanding of what Apple may be up to for AR is a guessing game at most, but some curious keywords as of late include "caffe", "barista", and "experiences" in a sign that a team is busy coming up creative ways to make AR make sense to iOS users as the company continues to invest in the technology as a way to interact with computing devices.

Of the current 33 openings, the extreme majority — 30 — are located at Apple's Cupertino headquarters.

In late April, Apple opened a position titled "AR Experience Programmed" that gives us perhaps the clearest indication of what it's aiming for with the technology. It mentions that the new Apple employee will join the very same team that created SwiftShot to create a "AAA game or other experiences" in order to "advance the world's understanding of Augmented Reality". 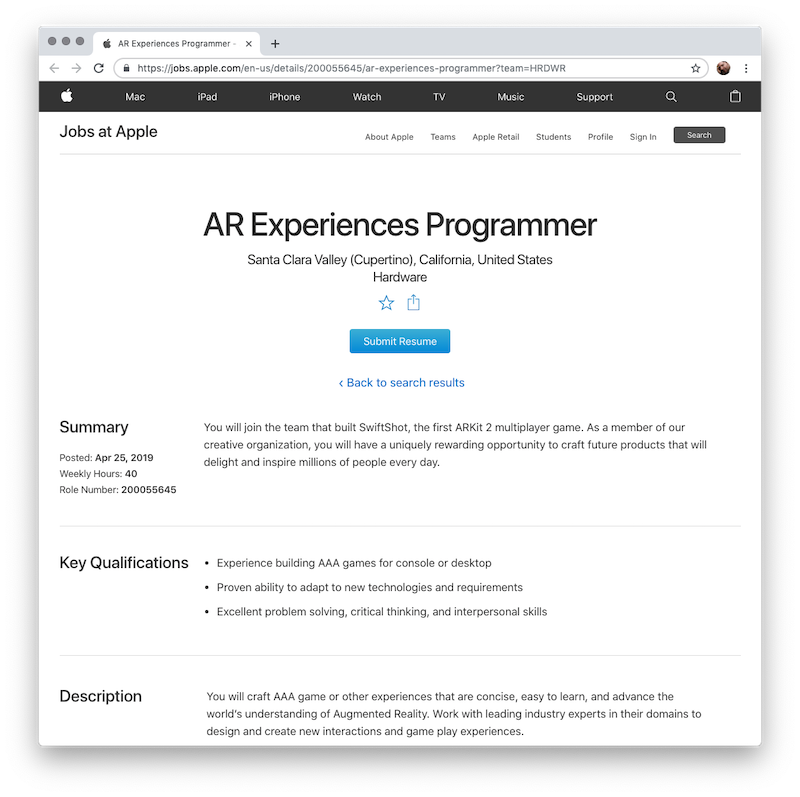 The full list of current AR-related openings are listed below as a way to see what Apple is currently looking for. The listings are as of May 20, 2019.

Rumors are that Apple will launch an AR headset sometime soon, likely tethered to an iOS device like an iPhone or iPad. Timelines point to 2020 for the product launch.